On our way home to Yuma from PP last Sunday the 8th. whilst letting my Ford Raptor loose feeling it's oats at 125mph. on the Coastal Hwy. north I caught a glimpse of two wild Burros on the west side of the road. They were heading east to cross over the road and continue trudging their way back up into the Pinacates.

I did a radical stop and turned around to take a closer look at them. About a quarter mile behind them were three more with a little colt bringing up the rear. They were clearly following an old trail along the edge of the salt pan. This was around two in the afternoon, one rarely sees a wild burrow out and active in the daylight.

Upon closer inspection on foot I found the ancient trail leading to and from the prehistoric artesian well known as "La Soda" as mentioned in a few of the old accounts of the region, namely "New Trails in Mexico" by Carl Lumholtz in 1912. I had in fact been reading the last pages the night before at my place in Mirador.

He mentioned La Soda several times concerning finding a reliable source of water for both man and beast while doing his exploring in the Sierra Del Rosarios north of Bahia Adair. Facing page 286 in his book are photos of the spot! Indians have been using that pozo while gathering salt to haul back home for thousands of years.

I had never seen wild Burros in that area before although there are yellow warning signs along the highway in that area to beware of the Arctic Caribou that abound in las dunas.

Saturday the 8th. Sorry but I got the date a day off in my report above. Anyway we were Jeep Rubicon beach combing for driftwood for our fire pit in Mirador most of the day along the beach at Bahia San Jorge. We were gathering a fairly good load along the beach that was mostly covered with thousands of plastic soda pop bottles when we see a single lonely Zopilote crouching down on a railroad tie fence post. I knew something was afoot due to his very limited body language so stopped to investigate. The beach there was a real mess since the whopper storm of the 1st. of January.

The winds had blown a crusty sand and sea foam coating onto the beach in places fifty feet or more above the high water line. The shrubs looked like they had been covered with a tan colored Xmas tree spray can snow coat. Anyway I finally found what Senior Zopilote was hoping that I wouldn't find. It was a Vaquita about three feet long almost picked clean of all skin and flesh. The articulated carcass was intact including the unmistakable short nosed toothy skull. It now resides as part of my yard art back in Mirador.

This is the second dead Vaquita that I now possess from that area. As mentioned a few years back I found one on the beach at Salinas Point. That one I deposited back in the dunes and marked it with my GPS. It is now picked clean by the death picker beetles and resides in my home yard art along with the skulls from two human bone piles that we found in the dunes at Mohawk Dry Lake. One still has some pretty nice dental work.

Strange as it might seem, the day before I had a nice chat with Capitan Mark of the Sea Shepard cutter John Paul AKA "Sharpie" as she was refueling at the fuel dump in the Old Port. I gave him the coordinates of our regular sighting of Vaquitas in the waters between Isla San Jorge and the beach up to Salinas Point.

That boat is quite a rig with heavy steel screens on all of the windows in the wheel house, heavy netting along the gunnels that pull up and protects all of the decks, four inch water cannons on both sides and a Mexican Naval boat on standby in the harbor "just in case". He showed me where the San Felipe cartel boats had fired a dud RPG into the hull a few years back. He said they have had to withstand hundreds of heavy fishing weights hurled at them and the crew along with homemade Molitov Cocktails.

He told me that the PP shrimp fleet still believe that they were responsible for the USA ban on commercial caught shrimp which is completely false as it is the Mexican Government that put the ban on shrimping in the upper Sea of Cortez.

Oddly, on the way home on Sunday we counted at least fifteen trawlers operating in the so-called "protected zone"!

Cool report….funny you are friendy with him and I am with Sunshine Rodriquez….sort of the Robin Hood of the Northern Zona ….thinking back I might have seen one about 4 years ago at Santo Tomas and plenty of T-bass down there in spurts. . Jerry 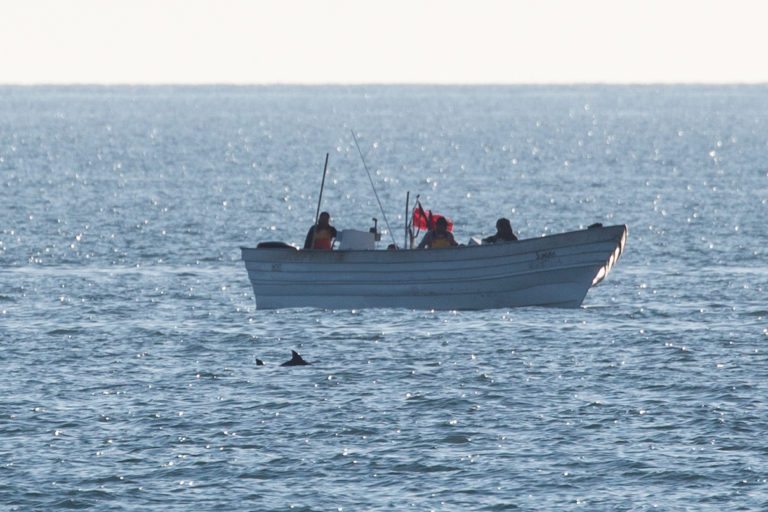 In the fight to save the vaquita, conservationists take on cartels

From above, the Sea of Cortez is a picture of serenity: turquoise waters lapping against rose-tinted bluffs and soft sand beaches. But down below, beneath the water’s surface, a war is raging. Each year, typically between late November and May, huge gillnets — some stretching more than 600...

All she did was rehash the same old tree hugger sob story as just another repeat, repeat, repeat..........with nothing new to add other than put some hard working pescadero out of a job, not to mention maybe killing him in order to solve a problem that is absolutely none of her fucking business. Most likely operating from mommies basement in Frisco or Kennebunkport in her pink jammies reeking of week old patchouli oil with a filthy rainbow died mop top and a portfolio in the major minus consisting only of her student loans that she is so sure that O-bammie and Brandon will negate for her sooner than later.

Like to hear what she would have to say if she has a passport and can actually produce the funds for a trip to the Northern Zona and maybe get personal with Senior Robin de la Hood. They most likely wouldn't even consider cutting up her fat white carcass and using it for bait in a Murex trampa.

Did she or anyone else ever consider that an extremely intelligent and very mobile marine mammal as La Vaquita has the ability to take a very leisurely swim to just about anywhere in the Gulf of California or beyond? There are so many hundreds of miles of coastline on both sides of the Gulf where no one is watching or even able to monitor and most of it is considered inshore where the trawlers and the Sea Shepherd wouldn't dare tread.

I remember many times watching pods of the big black Pilot Whales hunting inshore fish just a hundred feet or more from my viewpoint on the cliffs overlooking the Las Islas Encantadas south of San Felipe BC back in the 60's and 70's. Those animals would regularly cruise the Gulf and out to the Pacific coast.

Maybe someone should advise her that the Chi Coms and the Mexi Kartel have deep ties in every berg in La USA.

Wish your fever dream was true but the writer even as she admits no one really knows how many are left (not many) points the finger at the problem.This is a cartel money maker.When I was in San Felipe helping a friend install a cutting edge off grid power wall and solar system we met Rodriquez and actually ate dinner with him and his body guard.He needed a bodyguard because he told the fishermen in his association not to pay back any money the cartel loaned them for fuel and nets.The fishermen were at this point getting almost 1/5 of what they once got for bladders….then all of a sudden he gets arrested and thrown into prison…..and the cartel is back in charge….it is hopeless as long as some chinese shit with a limp dick and a bunch of Yen believes this fish is the answer. The government has also not provided the fishermen the subsides or new nets and trained them in the use.Time to blow up some damns if we want to set things right.
Last edited: Jan 19, 2022
You must log in or register to reply here.
Share:
Facebook Twitter Reddit Pinterest Tumblr WhatsApp Email Link
Top